The History of Eli Cobb

On September 29th, 1937, police in Old Monroe, Missouri arrived at the dilapidated family business of Eli Cobb, who was at the time suspected in the robbery of a local general store and disappearance of its owner. Receipts indicated that Cobb had been the last customer at the store.

Cobbs’ desolate grain elevator was a study in chaos. Inside, junk and rotting garbage covered the floor and counters. It was almost impossible to walk through the rooms. The smell of filth and decomposition was overwhelming. While the local sheriff, Ethel Woodrow, inspected the kitchen, he felt something brush against his jacket.

When he looked up to see what it was he ran into, he faced a large, dangling carcass hanging upside down from the beams. The carcass had been decapitated, slit open and gutted. An ugly sight to be sure, but a familiar one in that deer-hunting part of the country. It took a few moments to sink in, but soon Woodrow realized that it wasn’t a deer at all, it was the headless butchered body of a woman. Beatrice Cobb, Eli’s wife.

A quick search of the 5 acre family business turned up the bodies of his children, Joshua age 12, Emily age 9 and Adam age 4, in the large back room that served as their bedroom. Each child’s body had been laid in bed as if they where asleep, however later evidence turned up to suggest Cobb hunted them down in what reporters eventually dubbed his “maze of death.” The Maze, which was completely overlooked during the initial days of the investigation was created by Cobb cutting confusing paths into his family business, some of the “walls” where reinforced by plywood or barbed wire.

Looking For a Few Good Monsters!

Panicfest.com is looking for a few good monsters! No acting experience needed. We simply ask that you have the desire to scare the bejesus out of a bunch of folks you’ve never met before! Well…. actually we need a little more from you than that: We need you to work on weekends, provide your own transportation to the site and be reliable. You probably shouldn’t be claustrophobic or afraid of the dark, but that’s not so much a requirement as a good idea. If you are interested, simply fill out our form and someone will contact you. 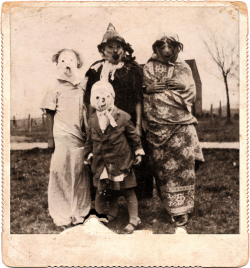